“Netflix and chill” is the current mantra of our generation. But it certainly didn’t come from a large group of people watching Christian movies on Netflix. As we spend an ever-increasing amount of our time in front of the television and allow our children to view whatever they want, we promote the popularity of mindless entertainment.

At what cost do we watch all of this television? Is there something better out there? We need to choose our screen time wisely and select programs that are not only educational but fulfilling and have eternal significance.

Why We Should Watch Christian Movies

Christian entertainment is not a new idea. Even before television, people sought entertainment in the form of books, music, and theatre. From the days of the Bible, people have sung songs and used these forms of entertainment as worship.

Christian movies provide a source of entertainment that feeds the soul. They resonate with viewers and teach life lessons from the Bible. Christian movies on Netflix give us a way to stay close to our Christian faith and moral foundation while allowing us to relax and unwind like the rest of the Netflix world. 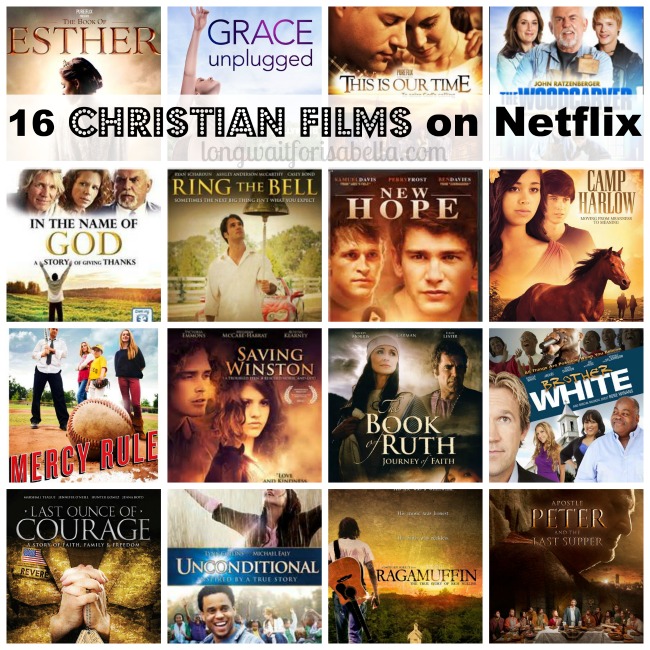 Until recently, Christian movies didn’t earn great accolades because they didn’t hold a place in popular culture and weren’t produced by big names in Hollywood. They didn’t cast famous actors, they didn’t make people rich, and weren’t at all glamorous.

However, the goal of Christian movies remained faithful to the teachings of the Bible and the idea that everyone should have access to the stories and the lessons that the Bible tells. The point was not to make money. The point was to teach people about Jesus.

It wasn’t until recently that movie studios like Sony and others in the entertainment industry created divisions specifically for producing Christian movies and TV shows. Unfortunately, they do it to make money, not to spread the Gospel.

Nevertheless, Christian movies and other forms of entertainment have gained in popularity and quality because studios with bigger budgets have started producing them. It seems like, maybe now, everyone wins.

The Best Christian Movies on Netflix

Without further ado, here are the top fifteen Christian movies on Netflix. Some rank at the top of the Netflix ratings while others are merely some of my favorites. These heartwarming and encouraging stories leave you feeling uplifted. I genuinely hope you and your family will enjoy them as much as I do.

A Matter of Faith

When a young Christian girl goes to college, her freshman year begins with influences by a popular biology professor. He teaches evolution as truth and offers it as the origin of life. Her father begins to suspect that something is wrong and he examines the situation only to discover something that catches him off guard. Concerned that his daughter may drift away from her faith, he intervenes.

One of the top Christian movies on Netflix, this film tells a story about trust, strength, and understanding. Your whole family will enjoy watching it together.

Michael Evens, a public high-school teacher, struggles in the months following his wife’s passing. He reinstates the Bible Club she founded years before. Irate parents try to disband the club, citing the separation of church and state. Authority figures passionately dispute the club and almost destroy their small Vermont town.

Michael has to make difficult choices regarding his job, his relationships, and his faith. This uplifting tale of strength, love, and unity will leave you feeling passionate about your faith and the people who strengthen it.

This Biblical drama follows Elijah, the devout Rabbi, during the times of King Herod. When the slaughter of innocent lives claims two boys that Elijah swore to protect, he vows to avenge their deaths.

After meeting Joseph, Mary, and Jesus, he doubts his feelings of vengeance and the reason behind it. He must choose whether he wants to kill his enemy or forgive him for the evil he committed. Find yourself inspired by one of the most real Christian movies on Netflix.

This story of the birth of Jesus has a unique spin. Bo the donkey and his other animal friends walk us through his experience in the miraculous story of the virgin birth. These endearing characters bring humor to the most important story of all time.

Bo’s companions, Dave the dove and Ruth, the sheep, stick by his side through even the most stressful times, reminding all of us that the power of true friendship never fails. One of the best animated Christian movies on Netflix will have you giggling with your entire family.

The Case for Christ

Great things always come of avowed atheists trying to disprove Christianity. This film tells the true story of an award-winning journalist who wants to use his honed journalistic and legal skills to prove that his wife’s newfound Christian faith is false.

He experiences very unexpected and life-changing results that we can all learn from in one of the most convicting Christian movies on Netflix. This movie will reaffirm your faith and remind you of why you believe what you believe.

This miniseries offers the retelling of some of the most prolific stories in scripture for a new generation. Powerful performances, beautiful visual effects, and exotic filming locations bring the Bible to life.

This spectacular ten-part series breathes life into the dramatic tales of courage and faith from Genesis to Revelation. These historical events will entertain and inspire your whole family as part of one of the best Christian movies on Netflix.

If The Bible wasn’t enough, AD: The Bible Continues will pick up where it left off with some of the greatest stories ever told. It explores exciting and inspiring events that happened after the crucifixion of Christ.

The aftermath of Christ’s death and its massive impact on the world influences the disciples, Mary, politicians, religious leaders, and everyone to follow. It completely changed the entire world forever.

The disciples struggle to share what they have seen, and this series transports us from feeling sorrow about Christ’s sacrifice to the awesome wonder of the Resurrection in one of the most inspiring Christian movies on Netflix.

The Prince of Egypt

The Prince of Egypt is an animated movie that follows the story of Moses from birth to becoming one of the greatest heroes of all time. People have passed down the story of Moses for centuries, but this cartoon brings it into perspective for people of all ages. Every generation will experience and understand the truth of the wonderful life of Moses.

Peter spends much of his life tormented by his denial of Christ just moments before Christ’s death. He attempts to atone for his failures by becoming one of Christ’s most influential disciples.

As he faces death at the hand of Nero, we watch as we fear whether his weakness will again betray him or whether he will rise as a triumphant hero in his final moments, just as Jesus did. This inspiring story reminds us of the suffering of Jesus and his followers.

You will feel deep conviction and a desire to profess and witness for Christ after watching one of the best Christian movies on Netflix.

A thirty-something successful marketing executive has a killer career, a stunning wardrobe, a charming apartment, and wonderful friends. The only thing she thinks she needs is a man. When she fills out her profile on the Christian dating website, ChristianMingle.com, she hopes to find someone nice.

Her knowledge of Christianity proves a bit rusty and her attempts to impress the perfect guy fail as he calls her out on her fake faith. He shows her a shallow life and drives her to create a real relationship with God. This genuinely perfect man brings her to a life-changing love for God and shows her the desires of her heart.

This tale of trust and redemption is one of the best Christian movies on Netflix for those looking for love. It will restore your faith in relationships.

We all know the inspiring story of Joseph, sold into slavery by his brothers and forced to interpret the Pharoah’s dreams. We all know how, with God’s help, Joseph became the leader of an entire nation.

In Joseph: King of Dreams, a DreamWorks film, we see the story played out before our eyes in a stunning display of characters and acting. One of the best Christian movies on Netflix will reaffirm our faith in the impossible and show what the power of God can do.

David vs. Goliath: Battle of Faith

The story of David displays excellent faith. As two great empires face-off, the shepherd, David, bravely takes on a giant. He conquers the giant with a slingshot and a stone, but most of all, his trust in God.

This film embodies the humility, courage, and faith of David, inspiring us all to step out in faith and trust God just a little bit more. Christian movies on Netflix don’t get much better than this.

A Question of Faith

David Newman, pastor, husband, and father, plans to take over his dad’s church. However, he neglects the promise he made to his son, twelve-year-old Eric.

Restaurant owner and spiritually-driven Kate is the single mother of her daughter, Maria. Free-spirited, teenage Maria wants to be the first in her family to attend college.

John Danielson’s failing construction company distracts him from seeing his daughter Michelle as a growing youth who needs her father’s support. He thinks her singing career will give him a way out of his financial trouble.

As the lives of these strangers intersect, fate strikes and all three families end up at a crossroads. They question their faith and deal with issues that begin to intertwine. They grow closer and closer together in a tale of unexpected events.

This romantic comedy about a fun-loving girl from New York City follows Jesse after her husband Chaz cheats and then files for divorce. Jesse still kindly helps Chaz’s widowed mother, Naomi, in her hometown of Bethel Cove.

Jesse’s dry wit, curiosity, and big city habits rub this local community the wrong way. She butts heads with Ben, the pastor of the local church, and finds out that he’s the brother-in-law of her ex-husband.

They discover feelings for each other, but struggle to make their relationship public, because they experience adversity in the disagreement of the town’s residents. This film searches for hope, peace, and acceptance.

Eric “Hoovey” Elliott has a promising high school basketball career, but when he collapses on the court, his future seems uncertain. He has a life-threatening brain tumor, and if he survives the high-risk surgery necessary for his survival, what will happen to his future?

His road to learning how to walk, read, and see seems long and uncertain. Overwhelming medical bills may undo everything his parents have worked to build. Through everything, the family turns to love and faith to get through.

Hoovey reads again, reshoots a basketball, and may have another chance at his dream if only he can step out on faith and take a shot. This tale of despair, disappointment, and growth will leave you feeling inspired and ready to take on your daily struggles.

The uplifting and inspiring message in each of these Christian movies on Netflix will encourage you. No matter what you struggle with, you will find determination in taking the next step in your life to overcome.

Put these Christian movies to the test. You can’t go wrong, and you will be happy you did.

A Box of Faith
Buy on Amazon

In God's Time
Buy on Amazon

Previous Websites Like BuzzFeed: The Top 10 Best BuzzFeed Alternatives
Next How to Unblur a Picture, Edit It, and Make It Perfect