Nook vs Kindle: Battle of the E-readers

WS Team Gadgets Comments Off on Nook vs Kindle: Battle of the E-readers 1,185 Views

First of all, we should start by saying that this Nook vs Kindle battle may not be such a fair fight. Nook presents itself to readers with only a single dedicated device and several Samsung-made, Nook-enhanced tablets. Amazon’s Kindle, on the other hand, has several types of devices, all made by them and all specifically designed for reading in the first place. Yet, all of these things considered, the Nook still presents itself as a nice alternative.

So we decided to have a go at another battle between these devices. The small reading devices have been compared by several media websites, and yet most of these head to head reviews are from at least a year ago. The time has come for an update on the situation. Kindle won most of the previous fights by a landslide. But that doesn’t mean that the Nook did not put up a good fight. Without tarrying too much now, let’s look at how these two devices do when pitted against each other.

Nook vs Kindle – Meeting the Contenders

Before we go to the actual Kindle vs Nook battle, we need to know more about the two opponents in the world of electronic reading. While the Kindle may be a pretty well-known device, the Nook’s abilities, and specs are more obscure. So until we compare Kindle and Nook, let’s look closely at what these two names mean.

On the Kindle side, we have a total of 4 eBook readers: the plain Kindle, the Kindle Paperwhite, the Kindle Voyage, and the Kindle for Kids (this one is basically a simple Kindle with added protection for kid-friendly usage). Apart from these four, there’s also the Kindle Fire, which we won’t talk about because it’s a tablet. We’ve decided to limit the Nook vs Kindle battle explicitly to E-readers. So it won’t be a Nook vs Kindle Fire comparison.

Without further ado, let’s look at each of the 3 readers’ pros and cons: 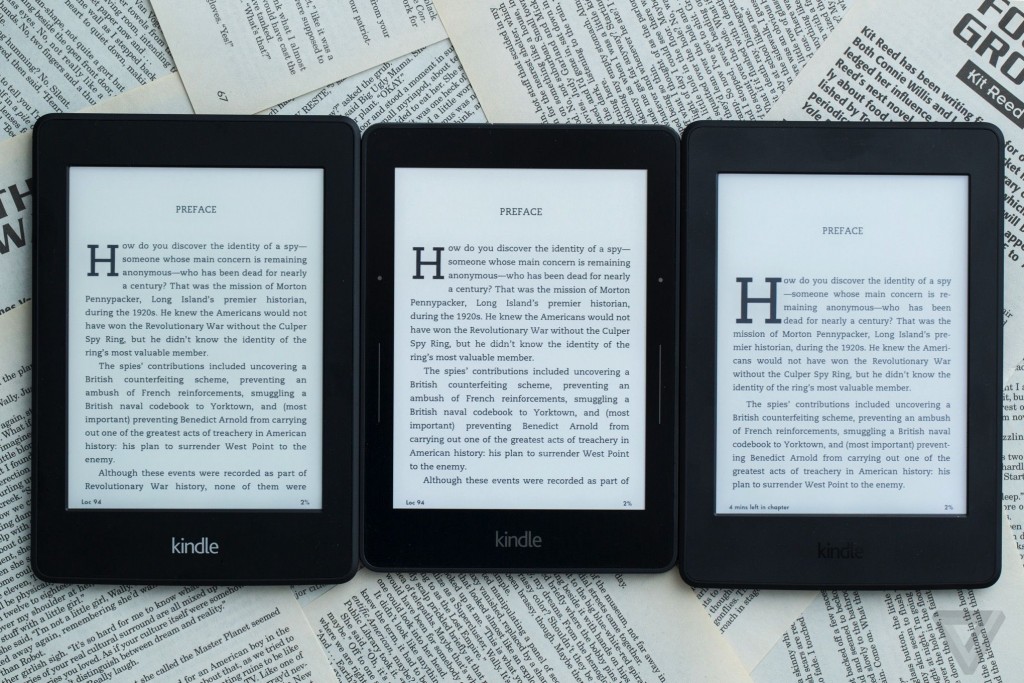 Coming to the Nook, this small book reader is still a good bet for those readers who particularly favor their reading experience. In the whole Nook vs Kindle battle, this tablet, paper-like reader is doing quite well.

The Nook eReader starts out with a price of $129.99 and free shipping. It has a 6”, glare-free, paper-like, GlowLight touchscreen. It can hold thousands of books and it has a resolution of 300 dpi with enhanced contrast. It’s waterproof, dustproof, and made of light, durable aluminum. However, by far the best features of the Nook is that it offers free Wi-Fi at Barnes & Noble, free lifetime support in their stores, as well as free books each time you go into their bookstores.

Another nice feature is that the reader can have multiple profiles for each member of the family. This way, they’re making sure there will be no more battles over books in the family.

Nook vs Kindle – the Battle

Certainly, if we look at the specs, the Nook eReader, and the Kindle Paperwhite are pretty equal contenders. And if we were to pit together just these two in the Nook vs Kindle battle, then we would surely have the Nook as a winner. And this is mainly because of the cool features users get at Barnes & Noble stores.

However, we must consider the fact that the Kindle has multiple devices. And when we look at that, it’s pretty hard not to go for the Kindle. Again, we’re talking here specifically about eReaders, and not about tablets. If we were to consider tablets, the Samsung Nook Galaxy Tab 4 would surely outrank the Kindle Voyage, especially because of its awesome price ($139.99).

Now that we’ve seen the most important arguments in the Nook vs Kindle battle, it would be time to draw a conclusion. However, it’s complicated. Of course: if we’re talking about functionality, the Kindle is the sure winner. If we’re talking about price vs what you can do, then the Nook takes the crown. But in the end, it’s all about which device fits you. We here have done our best to objectively talk to you about the Nook eReader and about the Kindle eReaders in the Nook vs Kindle battle. Now, it’s your turn to choose one.

We are a group of Tech Geeks, passionate about latest trends and we love to share our knowledge to world.
Previous Logitech Harmony Reviews: Keeping your Life in Sync
Next Top 3 Best Games for PS4 in 2015